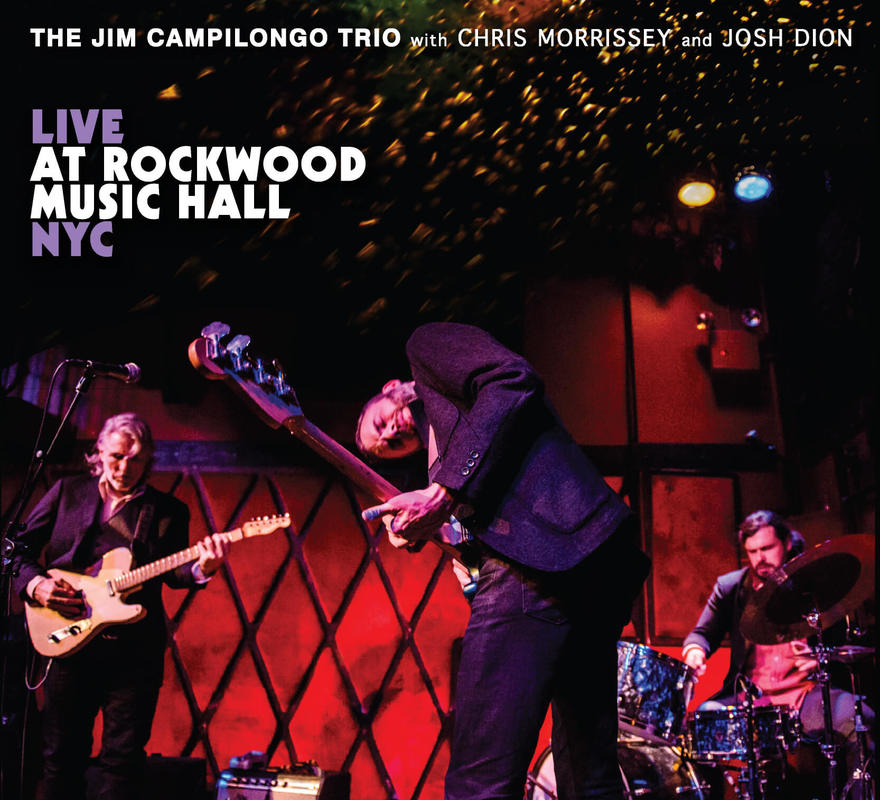 JC: "... an unprecedented chemistry. I think Josh and Chris are one of the greatest rhythm sections in the history of the world, and we absolutely take no prisoners! On a good night, we can plunge full-speed, head-first into uncharted territory, navigating a jazz sensibility akin to Miles Davis, with the rocking intensity of Cream, Hendrix and The Who".
The incredible Nels Cline, (Wilco, Nels Cline Singers, many others), who joins the trio whenever his busy touring schedule allows, is featured on two tracks: "Cock and Bull Story", and, "There You Are". The former clocks in at over ten minutes and highlights the band’s seemingly fathomless improvisational skills.

LIVE AT ROCKWOOD MUSIC HALL NYC, opens with its hair on fire with, “I’m Helen Keller and You’re a Waffle Iron”, reinterpreted from Jim's acclaimed LP, “Orange”. The band chugs, grinds, and howls before dropping out in the solo section, creating a, "The Who meet Miles Davis", maelstrom of harmony and freewheeling, seat-of-your-pants synergy.

JC: "This tune is everything I wanted it to be; dirty, raw and smart. It's a great opener”.
“Big Bill”, an up-tempo piece Campilongo wrote in ‘96 for the 10 Gallon Cats, is basically a "rhythm changes" tune the trio has completely - and repeatedly - retooled.

JC: “It’s completely different every night, and every night I look forward to playing it. There were so many good and different versions, we could have put out an entire record of 'Big Bill's, (laughs). I especially like the energy of this version, and what happens at 4:25 is magical!”
"Here I Am", (Ray Charles), features multi-instrumentalist, Josh Dion, on vocals.

JC: “'Here I Am', was recorded on two-track so we were limited somewhat in mixing as far as levels go, but Josh’s vocal performance was so special and the band dynamic so substantial, we knew we had to include it.”
“Jimi Jam”: Excerpted from an extended improv, Jimi Jam illustrates the “Free Rock” leanings of the trio. Faded in and out, 70’s live album style, its ferocity emanates from a vein of early-era Cream, or Hendrix.

JC: “I quoted Hendrix a few times , hence the title ‘Jimi Jam’. I’ve been in awe of Hendrix for nearly fifty years, and this is our humble tribute”.
"Cock and Bull Story”:

JC: “That track is one of the key reasons I wanted to release these performances as a live record! We change keys twice, divine our way into an introspective spell, finally falling into a section you could call, 'Comrades In Rage', (laughs). We’d never take this kind of chance in the studio, (laughs)! Sure, the perfectionist in me wants every hair in place, but the trade off for abandoning ‘perfection’ is capturing some unabashedly ferocious performances in real time... I can live with that!”
The two new, never-released tracks, "There You Are", "Sal’s Waltz", compliment the record beautifully; soothing respites from the burning intensity of the other tracks. Both are built around haunting, introspective melodies, taking the listener on a dynamic and impressionistic journey. And, Nels’ contribution on lap-steel guitar is...

JC: "... absolutely sublime! Nels is an amazing artist who has the rare gift to contribute exactly what serves a song while retaining his own inimitable voice”.
“Jim’s Blues” is a “CD only” bonus track. The trio deconstructs a blues form with a "second-line" backbeat over a thrilling eight minutes, typical of this elastic, empathetic trio’s penchant for honoring, while simultaneously twisting, traditional forms and styles.

JC: “I like this track because it has a jazz mentality yet is still robust, without straying into ‘alpha-blues’, ‘Blues Hammer’ clichés.”

JC: “I’ve always wanted to release a record that captured the band’s live spirit, but after you’ve booked expensive studio time, put on the headphones, and feel the clock ticking, it takes a toll. This record bypassed all of that, and I’m ecstatic with the unhinged quality and adventurous-yet-always-generous spirit of the group. This record is as true a representation of ‘what we do, live’ as we could make, and we are all very proud to bring it to you”.

Jim Campilongo is also a contributing columnist to Guitar Player Magazine, - "Vinyl Treasures" - and has been honored by the Fender® guitar company with his own Campilongo Signature Telecaster, an instrument made by Fender's elite Custom Shop (Visit www.jimcampilongo.com/ for more information on the Campilongo Tele) Regarding the video Jim produced for Fender's Princeton amplifier that went viral (500,000 hits), Campilongo notes, "Believe it or not, that Fender Princeton video is one of the biggest things that's happened to me in my career!”

With his composer/arranger/guitarist duties in The Little Willies (a band that includes Norah Jones, a guest on Campilongo’s Dream Dictionary), and a discography of hundreds of titles featuring a "who's who" of music, including JJ Cale, Cake, Martha Wainwright, Nels Cline, Bright Eyes, Gillian Welch & David Rawlings, Burning Spear and Peter Rowan, Jim Campilongo has carved a niche for himself as a uniquely original, prolific and in-demand guitarist. Jim’s numerous television appearances include The Late Show with David Letterman, Conan, Later… with Jools Holland, and The Abbey Road Sessions.